It's spring!!! The season of sun (supposedly...) flowers, yummy fruits and veggies. It's the season of the birds and the bees (understand that however you want to...) This is when we tend to lean toward the fresh, light tasting dishes, unlike in fall and winter where we need our dose of comfort food and cozy blankies. But because every season is a season to make someone happy, I made a pumpkin pie smack dab in the middle of spring. 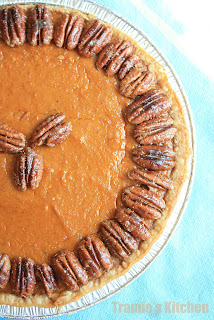 Thank goodness for the canned stuff!

Now, most pies are things of fall and winter. Pies make us think of Christmas and Thanksgiving. They make us think of that warm, spicy and comfy feeling in our tummy after the first bite. But THIS pie is LIGHT! It's really not too sweet and dare I say, healthy-ER than most pies (Yes, i said it! *gasp*) Obviously, there is the crust to be considered in the equation, but who's checking?! 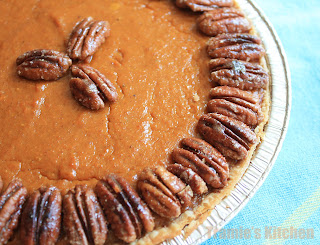 I got this recipe from Cast Sugar who got it from Chicago Tribune and the only reason for why mine is a tad lighter is due to the fat-free evaporated milk.

Put brown sugar, cinnamon, ginger and nutmeg in a mixing bowl and add the pumpkin mixture. Pour everything into the crust and bake for 10 minutes.

Lower heat to 350F and bake another 35-45 minutes, or until set. Arrange pecans around rim then let stand until cooled, about 1 hour. Refrigerate until ready to serve.


Maple cinnamon pecans
Toss everything together until pecans are well toasted. Spread on a small baking sheet lined with parchment paper. While pie is baking, stick the sheet in the oven on the lower rack for 5 minutes or so. Let cool then decorate when pie is done. 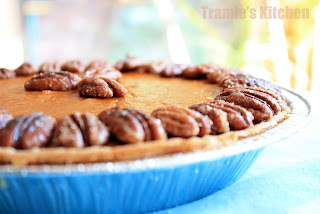 Now, this pie might taste even better if you listen to this song while eating it... It's about a merchant who has the best pumpkin pie recipe ever and wouldn't give it away to a corporate guy... And then you should really hear the part at the end when the credit rolls.

Enjoy a slice and the song, pumpkins!